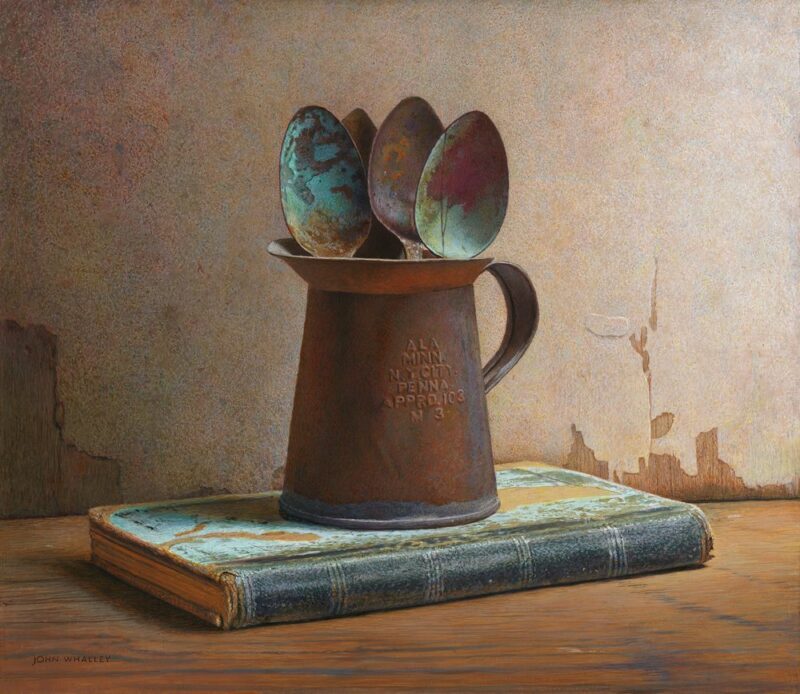 Advancing the tradition of American realists and acknowledging the Dutch masters, John Whalley’s paintings go well beyond mere technique. His work exudes tremendous warmth, luminosity and charm. He responds to what he calls “the beauty that speaks softly.” He was born in Brooklyn, New York and currently lives in midcoast Maine. Whalley received his BFA from the Rhode Island School of Design in 1976. His work is in numerous private, national and international collections including the Georgia Museum of Art, Athens, Georgia; the Otto Naumann Collection, New York City and the Alfred Bader Collection, Milwaukee, Wisconsin to name a few. His publications include John Whalley – American Realist published in 2001 and John Whalley – In New Light, a 30 year retrospective book of drawings and paintings published in 2006. In addition, he was featured on the television show Bill Green’s Maine in 2008.

The theme of this show is to present small still lives of objects in my studio that were of interest to me; that each, in some way, seemed to evoke a short story. Whether it was the worn patinas showing the small events of a lifetime of use that left their marks on their surfaces, or the natural processes of aging….oxidation of metal or splitting of wood – I wanted to present these things in such a way that they drew you in, to imagine the lives they had led.

“What I love about short stories is they can offer you a glimpse into a life or a circumstance, and leave you to fill in the pasts or futures of the characters they describe. Over the years, I certainly have done more elaborate works that might seem closer to a novel or a memoir, but not here. The compositions have anywhere from one to four main characters that I have picked up at a Maine antique shop or flea market. I’ve arranged them with care. As with the oil cans in “Primaries,” the hammer and wrench in “Camouflage,” the worn balls in “Duo,” or the spigots in the appropriately named “Spigots,” the actors are almost like members of a family, and we compare them for similarities or contrasting dissimilarities.

I love objects of nature that I find by the bay behind our home, and have included a few of these items, as well as a large drawing of grasses that had been cut along our road last summer, and lay drying in the hot sun. The drawing was an ambitious one, taking over 400 hours to complete during this last fall and winter. I’ve also included one seascape of sorts – the fish weirs on the far end of Campobello Island – just past the last of Maine on the coast and into the beginnings of Canada.
I hope these works bring you pleasure and that this group of humble short stories speaks in some meaningful way to you.”
~ John Whalley