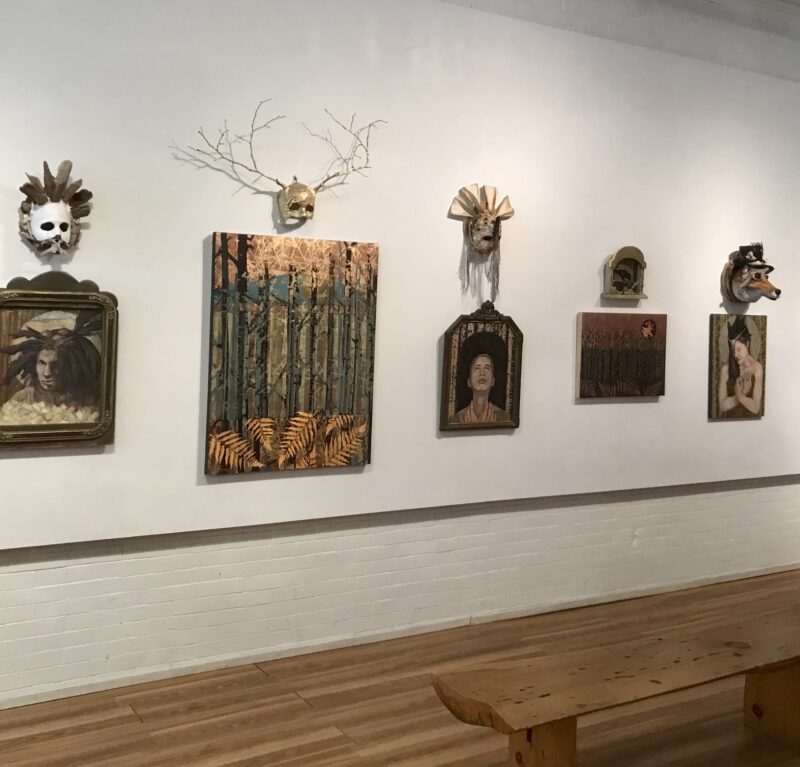 A beautiful and intriguing mother-daughter collaborative art show has just opened at the Sohn’s Gallery in downtown Bangor. This show, featuring the work of the well-known artist Deborah Jellison and her daughter Lauren Jellison, displays their own personal connections to nature through lovingly rendered mixed-media portraits, ethereal paintings of animals and plant matter delicately flecked with gold and masks constructed from found objects that look as though they belong to woodland gods.

This collaborative show is in part inspired by Maine’s lush conifer forests and rocky, ethereal coastlines and in part by the artists’ fascinations with mythology, fantasy and the powers of the natural world that are both terrifying and divine.

Deborah Jellison is a mixed-media artist from northern Maine who has shown her work locally, regionally and nationally for the pst 30 years. She earned a BFA in art education at the University of Maine and an MFA in visual art from the Vermont College of Fine Arts. She is member of the Maine Arts Commission, River Arts Gallery, Harlow Gallery and the Belfast Creative Coalition, the latter of which she is a founding member.

Lauren Jellison, also of Maine, is displaying her work at the Sohn’s Gallery for the first time. Her masks and driftwood pieces are crafted from a mix of natural objects she collected from many hikes in the Maine woods and a collection of man made objects, such as taxidermy eyes and recycled paper. Her work paired with her mother’s creates a show that speaks to the powerful forces of nature that are profoundly captivating, a bit eerie and quite otherworldly.

A reception will be held at the Sohn’s Gallery in The Rock & Art Shop in downtown Bangor on May 6 with an artist talk at 5:30 p.m.

Sign up now for the Café des Artistes newsletter!

Receive news and information about Maine artists and events delivered right to your inbox.