An opening reception for all shows will be held from 4 to 7 p.m. Aug. 5 outdoors behind the gallery. Masks are encouraged while inside the gallery.

Dowling Walsh Gallery is at 365 Main St. in Rockland. The gallery is open from 10 a.m. to 5 p.m. Tuesday through Saturday and by appointment on Sundays and Mondays. Visit www.dowlingwalsh.com, or call 207-596-0084 for more information.

Scott Kelley presents his naturalist approach through detailed watercolor and gouache paintings. The series have ranged from fictional portraits of whaling children, to personified animals for his children’s book, “BIRCH,” to icebergs in Antarctica. Imbued with suggested narrative and character quality, fauna are an overarching focus of his practice.

Kelley’s work is in numerous public and private collections, including the Portland Museum of Art and the Portland Public Library. He was awarded a fellowship to the Edward Albee Foundation in 1993. He also received a grant from the National Science Foundation Antarctic Artists and Writers Program, which sent him to Palmer Station, Antarctica in 2003. Scott Kelley lives and works on Peaks Island.

Daniel Minter is an American artist known for his work in the mediums of painting and assemblage. His overall body of work often deals with themes of displacement and diaspora. Minter’s work has been featured and acquired in permanent collection by numerous institutions and galleries including the Portland Museum of Art, Seattle Art Museum, The Charles H. Wright Museum, Tacoma Art Museum, Bates College, University of Southern Maine, Center for Maine Contemporary Art, Bowdoin College Art Museum, Farnsworth Art Museum, Bates College Museum of Art, The David C. Driskell Center and the Northwest African American Art Museum. In 2021 Minter was awarded the prestigious Joyce Award. In that same year he was awarded the distinguished Caldecott Medal. Minter has traveled extensively across the African Diaspora. A travel grant from the National Endowment for the Arts enabled him to live and work in Salvador, Bahia Brazil where he established relationships that have continued to nurture his life and work in important ways.

Minter has illustrated over 15 children’s books, many of them award winning, including the Coretta Scott King Illustration Honor. He was also commissioned in both 2004 and 2011 to create Kwanzaa stamps for the U.S. Postal Service. As founding director of Maine Freedom Trails, he has helped highlight the history of the Underground Railroad and the abolitionist movement in New England. For the past 15 years Minter has raised awareness of the forced removal in 1912 of an interracial community on Maine’s Malaga Island. His formative work on the subject of Malaga emerges from Minter’s active engagement with the island, its descendants, archeologists, anthropologists and scholars. This dedication to righting history was pivotal in having the island designated a public preserve.

In 2018, Minter co-founded Indigo Arts Alliance, a nonprofit dedicated to cultivating the artistic development of people of African descent. To date the organization has hosted over 28 Black and brown artists from across the globe. In 2022 the organization was one of ten nationally awarded the Andy Warhol Foundation for the Visual Arts grant. Minter is a graduate of the Art Institute of Atlanta and holds an Honorary Doctorate of Arts from The Maine College of Art.

Madeleine Morlet is interested in the ways photography translates reality and the restrictions set by a single frame or point of view, often thinking about her role as the photographer being similar to a subjective third-person narrator who both writes and discovers their story. Her work explores themes of memory, home and belonging, and looks to understand its subjects within their geographic space. In this way, the camera becomes a tool for connecting and finding purpose, especially when it comes to engaging with new environments and communities. 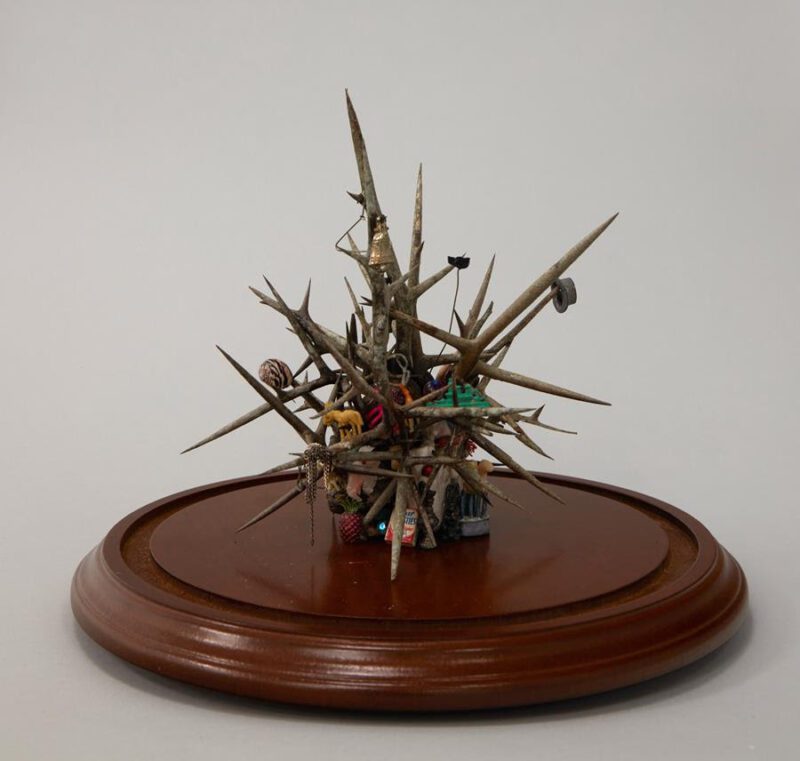 Marilynn Gelfman Karp is a sculptor whose mixed-media, found object works are represented in collections nationally and abroad. She holds a doctorate in physics and aesthetics and has taught art and material culture at New York University for 42 years. Karp is the author of “In Flagrante Collecto: Caught in the Act of Collecting” (Abrams, 2006), as well as the forthcoming book “Uncorked: A Corkscrew Collection” (Abbeville, 2020). She has given interviews, presented papers and appeared on panels at museums and universities on various topics within the purview of collecting. She is the president of the Anonymous Arts Recovery Society and a trustee and board member of the Preservation League of New York State. Karp divides her time between her New York City studio and a farmhouse in upstate New York.

In her own words:

In April 1957, I was in my sophomore year at Hunter College with a four-hour break between classes on Tuesdays and I was a dedicated walker in my city. On this particular clear, early spring day in Manhattan, in bright streaming sunlight, I passed shops on lower Second Avenue, window browsing. A window lettered Variety Store came into view. A haphazard array of stuff attracted my attention. Legs of condensation trickled down the interior of the glass revealing a deflated beachball couching dead flies, a few skeins of embroidery threads with unglued fatigued wrapper labels, a sun-bleached deck of playing cards, faded crepe paper, a dusty stack of glass cups. A branch from a pine tree had been painted white and stuck into a perforated convex metal base with a flat bottom, perhaps to provide a hint of long-gone Xmas joy and the availability of former seasonal merchandise. Maybe the imitation tree itself had been for sale. Apparently, the metal base had accumulated enough present moisture to nudge the branch to life and tiny green buds had formed, responding to the sunlight, in the crotch of each twig. The urgency of nature in this unanticipated happenstance was astonishing. This was a moment of cosmic consciousness for me…and a flashpoint.

Cyclical occurrence is natural, predictable. I’ve been thinking about where art and truly new ideas come from. There is latent potential in the ordinary. I try to enlist the inherent surprise lurking unrealized in the expected…what are familiar objects/ideas capable of becoming? If we are careful observers, if we actually look to see, we are surrounded by surprising wonders and memorable instances of unions of nature-in-action-with-manufacture. My visual life is rife with these doings.

Occasionally an artifact can be taken for a natural object…crucible slag can pretend to be a nest, a 100-sided die may pose as an egg, a lumber wedge may masquerade as a mushroom -and- conversely, a naturally occurring hive, nest, seed, bud, shell or fruit might be taken for a manmade contrivance. I play with the idea of unions of these confounding things and their settings. I’m attracted to inventing landscapes, gardens, maps, sites, conditions, situations and incidents out of duplicitous natural ingredients and fraudulent manmade bits and pieces. It is important to me that the component parts be familiar to you, the viewer, and mysterious in their new sculptural contexts.

Sign up now for the Café des Artistes newsletter!

Receive news and information about Maine artists and events delivered right to your inbox.