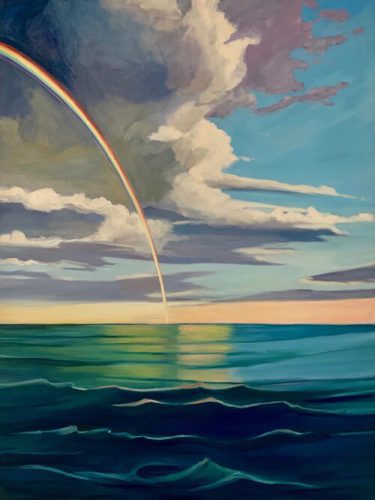 Nancy Grice is happy to announce that Nancy Grice Studio in Harpswell Maine is open for visitors, by appointment only, now through September. I am showing paintings of Maine, New Zealand and NYC. Please visit my website at www.nancygrice.com for more information.

Nancy received a BFA in Painting at the Massachusetts College of Art, Boston. After graduating she trained extensively in decorative painting techniques at various schools and workshops around the US.

She founded a company that provided decorative painting, murals and gilding for residential and commercial projects in the Boston area, which she worked in for twenty years. She taught decorative painting techniques at the Worcester Art Museum and other craft schools.

She also received an MA in Counseling Psychology from Lesley University in Cambridge, MA.

Nancy has had two solo exhibitions:  Scene and Unseen – Mandalas and the Landscape at theParish Center for the Arts in Westford, MA in 2007; and an Exhibition of the Work of Nancy E. Grice at the State Archives Building, Office of the Secretary of State, Boston, MA in 2006. She has participated in numerous group exhibitions; notably two at the Essex Art Museum in Lawrence, MA; and a national juried exhibit at the Rocky Neck Art Colony called Environments: A Sense of Place in 2006. She has also exhibited in Open Studios and various regional exhibitions. Her work is in private collections.

Nancy has organized and led several retreats and workshops based on Mandala Painting in the US and in New Zealand.  In 2016, she spoke at the Maine Jung Center “Tools of Individuation Series” on “Scene and Unseen, and Individuation Journey Through Landscapes, Mandalas and Maine”.

She currently resides with her husband in Harpswell, Maine, and Dunedin, New Zealand: two places that just happen to provide sublime landscape material. She currently displays her work at the Moray Gallery in Dunedin and Pea Sea Art in Port Chalmers, NZ. In the US, her work is available at her studio by appointment in Harpswell, ME.